As the daily death toll decreased for the first time in New York on April 5, many of us are bracing for the storm to end and hopeful for our lives to resume outside of our homes. The relief is not only that the threat may be peaking, or that we can stop disinfecting our groceries, but that our loved ones working on the front lines of this disaster will be out of harm's way. I'm the daughter of a 9/11 first responder; I know as fear winds down, another battle is just beginning.

Health care workers are at a greater risk of contracting the novel coronavirus. In New York, according to a report from Business Insider, many providers with symptoms are not being tested, but asked to stay home for just seven days before resuming work. In some cases where a provider tests positive but remains asymptomatic, they've been asked to continue working because our hospitals are already short staffed and operating at their maximum capacity. When the rest of the country moves on and rebuilds, a new threat of post-traumatic stress disorder faces responders, and their families, that could rage for years.
My father was a sergeant in the Emergency Service Unit of the NYPD during the nearly nine months he spent at Ground Zero. What started as a rescue mission searching for survivors quickly turned to one of recovery of human remains. At 14-years-old, it was hard for me to understand what he was still doing there in February of 2002. We hardly saw him my first year of high school. He'd come home, take off his Carhartt bodysuit covered in World Trade Center dust, throw it down the basement stairs to wash, and sleep a few hours before waking for another shift. When I asked him what he was searching for at Ground Zero, he simply said, "Thumbs." 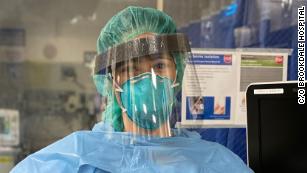 Those working in the health care system are now also enduring trauma, worrying that they may become infected. Some are sleeping in their garages, in hotel rooms with coworkers, or sending their children or parents to live elsewhere to reduce their exposure to the virus.
Nearly 20 years separates this pandemic from the September 11th attacks in New York. At the time of writing, the number of total positive Covid-19 cases in New York state made up 10.5% of those across the world. Once again, we are an epicenter of trauma and death with another 8.7% of the pandemic's deaths in our state alone.
Nightly, we're opening our windows and standing on porches to cheer and praise our responder heroes—as they are—sacrificing their own well-being and safety to help others. Like my father and other first responders at Ground Zero, we've expected doctors and nurses to perform their jobs without adequate Personal Protective Equipment (PPE). My father was told he didn't need a proper mask because the air was safe to breathe.
And the similarities don't end there.
Clapping from our balconies for our heroes is not enough. Though helpful, neither are meals, donations, or stimulus packages. I know this intimately as more of my father's old coworkers die each year as a direct result of their exposure at Ground Zero. Just ask John Feal, a 9/11 first responder, who has been to Congress numerous times lobbying for financial coverage for responders dying of cancers borne of Ground Zero. Families of responders may not lose their loved one to the virus, but what they may not realize -- as we hadn't -- was that you could lose parts of them to their work. 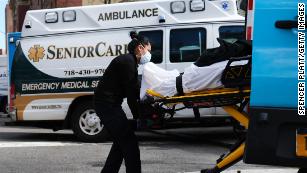 We celebrate our heroes but quickly expect them to resume their normal lives after working through a national crisis. My father left a war zone in the heart of our city and came home to his family and his job at the NYPD in the Emergency Service Unit. He was chronically exhausted, angry, hyper-vigilant, on an inhaler and in desperate need of more support than we could provide him. Eight years after 9/11, my parents ended their 25 year marriage.
The men and women working in hospitals, ambulances, and treating covid patients will be expected to resume their jobs, too -- re-enter the site of their most traumatic professional moments -- where patients young and old, without a single family member allowed by their side, died in acute respiratory failure. The endless phone calls they made to families on the death of their loved one will rob them of sleep long after a vaccine neutralizes our collective fear. As a society, when the immediate threat is over, we will still expect responders to continue saving people who enter the emergency room doors. But who will care for them or their families when the pandemic ends? If we've learned anything in the past few weeks, our economy is only as successful as the health of the people who work to uphold it. 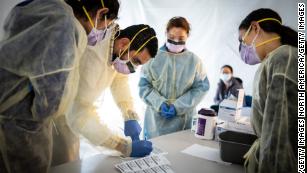 In the months that follow this tragedy, we will need to look out for the signs of PTSD in those on the frontline. My father wasn't required to see a mental health counselor in the aftermath. For many police like him, the stigma within the department prevented him from seeking help for years. If you find yourself face-to-face with a loved one who is changed by their work this last month, take that as your sign to mobilize. We must support our heroes by having systems in place, securing them affordable and ready access to mental health counseling, drug and alcohol treatment, and the proper time they will need to heal. If we want responders to continue their essential jobs, and do them well, we must afford them our praise in tangible, actionable ways.
On CBS' "60 Minutes" on Sunday, Dr. Yuval Neria -- the director of trauma and PTSD at New York State Psychiatric Institute -- warned of a possible "second pandemic," one concerning mental health. After 9/11, roughly one to five percent of New Yorkers developed PSTD, according to Neria. Now, think of everyone you know working essential jobs outside of their homes in the fight against this disease right now. With our country facing a serious recession, it's unlikely there will be any budget set aside for their health in the aftermath.
On late nights at Ground Zero, first responders were haunted by the sound of Personal Alert Safety System (PASS) alarms -- a device used to alert others that a firefighter is motionless and in need of help. For this generation of responders, it may be the calls of code blue, indicating a patient's heart has stopped, or their muffled cries for family in their final moments. We can truly thank our heroes only if we don't forget them in their coming hours of need.

Stay up to date with what eMedical Supplies is up to!

Ethics, and consciousness matter. We believe that the service and products we provide MATTER to our clients. There is no compromise on quality. Allowing us to help you is a PRIVILEGE.

Added to your cart: